C as in Contrabass 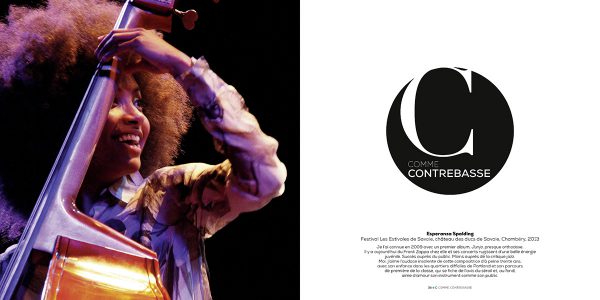 I was introduced to Esperanza Spalding in 2009 when her first album, Junjo, which was virtually mainstream, appeared. These days, there’s something Frank Zappa’-like about her, and her concerts bellow with a wonderful youthful energy.  A great success with the public.  Less so among jazz critics. Personally, I like the cheeky daring of this composer, barely thirty years-old, with her childhood spent in the poor neighbourhoods of Portland, Oregon, and her top of the class career, who pokes fun of what the establishment thinks, and loves her instrument as much as she loves her audience.

This picture is published in my ABC FOR JAZZ LOVERS, the english version of my Abécédaire amoureux du jazz, a 180 pages book with a foreword by Marcus Miller, published by Snoeck and which bring together more than 200 jazz portraits took on stage and backstage, for more than thirty years now, all around the world for Jazz Hot magazine.